Great weather and very transparent skies for this session.  I started out with the goal of getting two comets, but since they didn’t get into position until later, I started off with the Moon, then M45 and M31.  I also shot Pickering’s Triangle, part of the Veil Nebula complex, but didn’t get enough subs to do it any justice.

The comets were small, but interesting with long tails instead of being just puff balls.    67P has a really long tail in images taken by others.  I was glad to get as much as I got shooting from the middle of town with all the LP.

A quick outing before the weather got bad as a tropical storm hits from the Gulf.   I wanted to test the new T-adapter fittings I got for the AT60ED to attach the camera instead of using the 1.25″ eyepiece adapter, like I had to do for the first light images.

I was having a good night of steady seeing and really good guiding (<1.13 arc sec error) for this object and the Pleiades on this night.  I went until it was time to flip and the guiding was starting to degrade.   78 minutes worth of subs was good enough to show this object well. 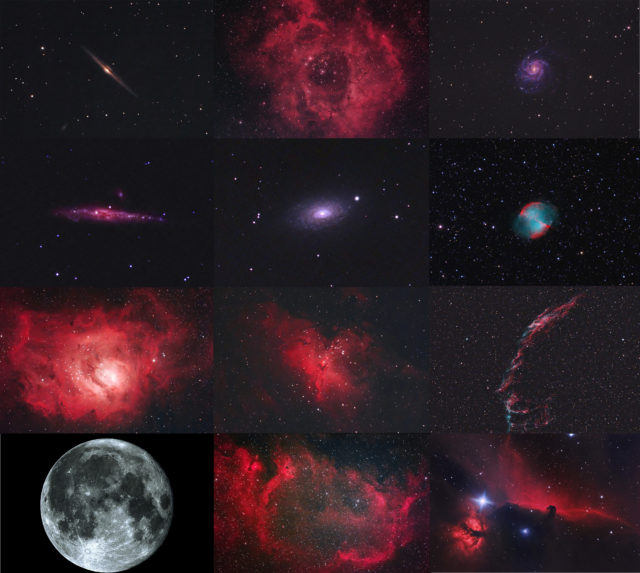 Friday night, Jun 19th, 2020 was warm and muggy and clouds persisted till after 9:00 PM.  It was predicted to clear, so I went to bed early and woke up just before 2:00 AM and setup my scope then.  It was clear, but the transparency was poor and the humidity was still high.

I managed to get a decent amount of data on two objects, and I also peeked at 2 or 3 other things in between.   M22, the globular cluster in the first image, was a secondary target and I really wanted to get the Omega Nebula and the Trifid Nebula nearby.  My narrow window to image them was so small, however.  Trees and streetlights were in the way.   By the time I was ready to shoot, that area had moved out of position.

The Ring Nebula was a quick peek that turned into a usable image.  The full size image is a crop at 100% resolution of the central area.  I was hoping to pick up that galaxy that is nearby to the Ring, but 48×15 sec sub-images wasn’t enough to bring it out.

However, I did have a stack of 34×30 sec sub-images taken in March that I blended this night’s data with and now you can see it, just barely,  above and slightly left of the ring.   Check it out:

It looks like I need to get out of the big city to get the summertime nebulae targets like Omega and the Trifid.  Late June and early July sometimes has clear skies and hopefully I’ll be lucky and get to a dark sky site before too long.