Terrible conditions (and location) for this imaging session.  I tried several things before settling on one minute sub-images as my best bet for the conditions.  (Bortle 7/Orange zone, high-altitude jet stream clouds with bad seeing and temps near 60 degrees, which while nice and cool for us, is a bit warm for a Canon sensor inside a camera body. )

What can I say?  At least there was some photogenic aspect with Capella in the image.  Processing was difficult with lots of residual noise from all the LP, clouds and warm temps.  But, it was an opportunity to image.   Late December usually doesn’t offer much in the way of clear night time skies.

After these 1 minute subs, I took a chance and shot 20 x 300 sec images at ISO 100 while tracking the comet with the guider.  I was able to add those in to the above image and I came out with this as a result: 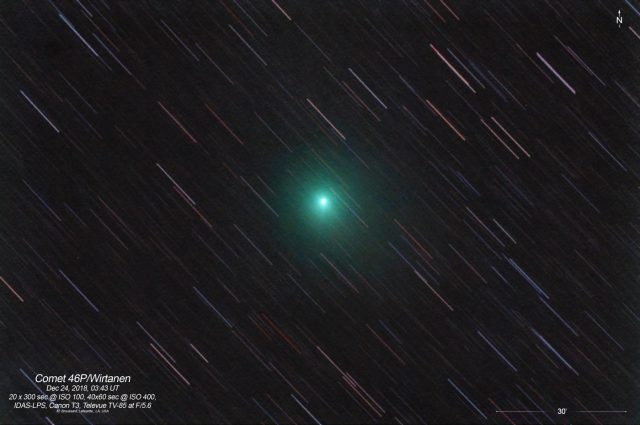 As you can see, the longer subs managed to pull more of the ion tail out of the muck.  I also added some of this to the star-freeze version and updated the display images.

Before I could even start shooting, I had to take the mount apart in the field and unstick a stuck motor that was giving me lots of trouble.  I almost thought I would scratch and not get any shots of this naked eye comet.   Luckily, I had tools and was able to rectify the situation.

I had trouble seeing the comet naked eye at first, but as soon as it rose high enough out of the muck, I was able to spot it without optical aid.  I was at my Bortle 4/Green zone site and it was probably the clearest night so far this season.   So, conditions were exceptional and it was cold enough (down to 37 degrees F) to use ISO 6400 without too much noise.

I still have one other set of 1 minute, ISO 3200 subs left to process.  I’ll probably be updating this post later after I do them.

Yep, I was able to get these 40×60 sec ISO 3200 sub-images calibrated and stacked.   Here’s the result of them by themselves:

Not too bad for 1 minute exposures.   Color could have been better.    Oh, well….

For an encore, I have this animated GIF showing the movement of the comet  for just under an hour of time:

While the comet is moving and will blur if you expose too long while tracking the stars, you can also track it and expose for much longer.  I tried 5 minute ISO 3200 sub-images and managed to get 4 like that before I tore down the rig.   Here are two of them together for a total of 10 minutes of exposure:

Finally, here is the set of 40 x 1 minute ISO 6400 sub-images with a little bit of the above data and labels describing the image: 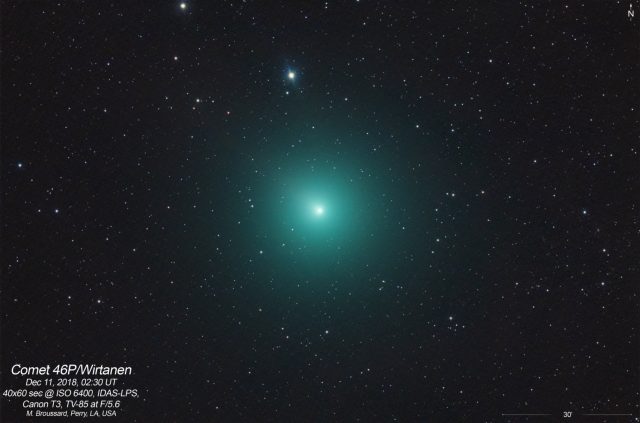 I was surprised at how well ISO 6400 worked out.  Usually, it is too warm to shoot at this setting.   It was 37 F when I got back to my place and shot the darks.   I just left the scope outside and did them while I napped.  It was probably a little warmer when I took these subs, but close enough to calibrate the extra noise out of them.

I used 4 minute subs and I could have gone even longer at this location, but my guiding was iffy with bad seeing.   Out of 20 minutes of subs, I lost one, so this is only 16 minutes of exposure.

Since it was so few, I just stacked the subs once while aligned on the stars and then used one sub of the central core to hide the streak  caused by the comet’s movement in the sky.  A quick and dirty star-freeze job.    lol   🙂

Comet Wirtanen is looking to be the best comet this season.  It is a short-period comet that comes around every 5.6 years.  It should be at it’s best as it passes closest to Earth:

So, it has 2 more weeks until that happens and look at the size of that thing already.   It is huge!  See the comparison with the moon taken with the same scope below:

BTW, the above image appeared on the home page of SpaceWeather.com on Dec 4th and 5th, 2018  and is also featured in an article on the Televue Optics blog, which are the guys that make my scope and focal reducer/flattener.   🙂

I re-vamped the above image with the better version star-freeze image (and also with both the comet and the moon oriented north) and that is here: 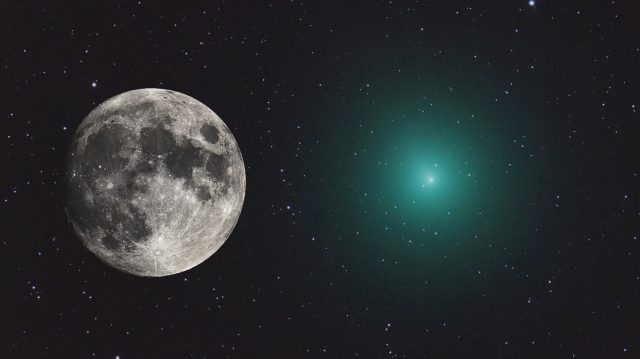 I shot two sets of data for this comet.  Both were 40 sub-images.  The first image and the image below are from the first set.  The moon/comet comparison image above was done from the second set.

Taking another crack at processing the first data set, I made this version below that has a slightly different comet position, is a little lighter and shows more coma, but less tail:

Here’s the second set of data with a star streaks and star freeze version of the comet with extra processing plus a red boost on the former and minimal processing for the latter:

Finally, here are both sets of the comet together, but with the background stars from only one set of 40 x 2 min subs:

Lots more coma is visible, plus the tail from the fist set of subs shows as well.  I think here we have a coma that is so bright it is blowing out the faint tail as seen in the second set above.   Not as much coma was picked up when it was lower in the sky muck, but the wavelengths from the tail got through and made it more obvious, as seen in the first set of subs.

So, it is possible that shorter “core” sub-images mixed in with longer exposures to get the coma might be a way to tame this comet and get a good final image with DSLR equipment.   I will try that the next time I get to image this beast. 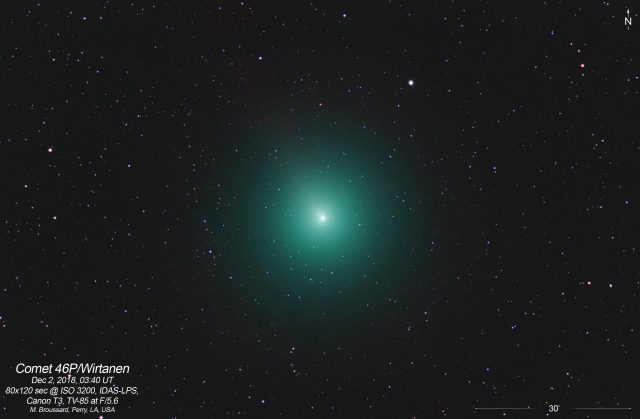 I just knew there was more there.   I just had to strive for the right stretch and do selective red channel boosting.   The tail was mostly in the red channel and that gets clipped a bit with the removal of LP and background noise.   So, I had to leave as much as possible of the red in the tail area but suppress it everywhere else.  Some selective masks for various saturation and color balance adjustments did the trick.

I had a chance to take another crack at the star-streaks version of the image with the above data and considerations and also added Larson Sekanina filtering for the tail: