1I haven’t told anyone of this.  This is the first time I’ve collected all my thoughts and decided to write something down, some ten or so days later.  I am still unsure about so much.   But, here goes…

While prepping my scope for an imaging test with a new camera,  I saw something weird on Friday, March 3rd, 2017 CST just after sunset.   I would have to say that whatever I saw,  it remains unidentified.

My scope was aimed at the moon.  It was dusk, but not fully dark.  I was setting focus on a guide camera and small guidescope in a program called PHD2Guiding.  (It mostly only displays video and does not record it, unfortunately.)   The camera, an Orion StarShoot AutoGuider, outputs black and white only (monochrome) and the view looked like the simulated example image I created below:

As soon as I reached focus and adjusted the exposure down so that the moon was not so overexposed, I saw something bright that was right next to the unlit portion of the moon.   I immediately noticed that the bright object was MOVING, seemingly coming from in front of the moon and moving away from it towards the left or East.  At that point, I was not even aware that the Moon/Aldebaran Occultation, set for the night after this one, was going to occur.   Whatever was happening here, it seemed to be mimicking an event that was going to happen the next night.

The object, whatever it was, actually moved out of the frame of view of the camera within about 30 seconds.   But, before that occurred, I was also seeing this thing with the naked eye.   I couldn’t believe the screen, so I had to look up and I saw it.

It was reddish colored and large and it was not really stellar like a star.  It had more of a round shape to it.   It could easily be mistaken for a large star like Aldebaran, except for the fact that it was moving and accelerating away from the moon.  Remember, too, that this is dusk and the sky was still quite bright.  Hardly any stars were showing, which is why I was using the moon as a focus target in the first place. 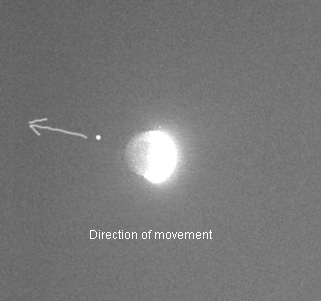 By the time it drifted out of the field of the camera, I was following it by eye.   It seemed to linger in the area and then, as it moved further from the moon, it dimmed and shrunk in size, then became invisible after only a few moments.    I’d say it was about 1 minute, 30 seconds of view time, more or less, for the whole event.   Whatever it was only traveled a few degrees from the Moon before it disappeared.  That is so unlike a normal satellite, which in that amount of time would have moved a considerable distance across the sky, IMO.

I was dumb-founded at that point, to say the least.  I almost couldn’t believe my own eyes.   I finally looked back at the moon on the laptop screen and there is another star right next to the top of the Moon.   It was a bright star of the constellation Taurus the bull, but not Aldebaran.  It was then I remembered that there was something up with Aldebaran and the moon that was going to happen soon, but I mixed up my dates and thought it was on the night of the March 3rd/4th instead of the 4th/5th.   I finally straightened this out in my head after I started writing this.

Later that evening after the event occurred, I felt like such an idiot for not trying to record it.   I thought about recording it while it was in progress, but I was more worried about messing up my mount alignment than recording the object, for some reason.

For the actual night of the Aldebaran/Moon Occultation, I was clouded out and did not get to see it.  Whatever happened Friday night took on the exact same form, but you would have had to watch a very long time to notice the movement for the real occultation.   It would be of the moon moving towards the bright star, not the other way around.  Plus, the “star” wouldn’t go flying off and disappear in under 2 minutes.   It was so weird to see, to say the least!