Could carbon credits be the choice for a form of currency in a possible future, single-currency world?  By the talk of our politicians on the world stage you would think this is what they are hoping will happen.  I think we should hope for all our sakes that such an event never happens.  We were warned long ago about how a one-world government with a single system of currency might act – it would be evil.

Exactly why use carbon as a basis for exchange?  What is it?  Well, it is probably the most abundant element that is a solid at normal room temperatures.  It makes up most of what we are and use for food and fuels.  In fact, most Earth life is considered to be carbon-based life forms.  In physics textbooks, it is said to have 6 electrons, 6 protons and 6 neutrons.  And, most pertinent to our discussion, there’s a school of thought that says carbon dioxide (CO2,) a form of carbon, is responsible for the so-called “global warming” theory of climate change.  Some authorities are predicting that if we release too much CO2 into the atmosphere by our burning of fossil fuels and other carbon-based matter, it will trap too much heat and we’ll overheat like a closed greenhouse in the middle of summer.  To control the damage to the environment from such an event, the Powers That Be (PTB) have decided that an appeal to, “…save the future of our children!  Control carbon emissions!…” will be all it takes to take total control of us and all future generations.  No unauthorized carbon releasing activity of any kind will be tolerated, as if their beast of a system is the only way to save us from ourselves.

Let’s be frank, anyone that says they have to take away my freedom to live life as I see fit is not a person I would want to associate with. Not only is it un-American, it’s unnatural.  Like the animals, we are born free.  Our founding fathers knew this and wrote a document that guaranteed that our freedoms can not be taken away, no matter what.  If I do not harm the environment or anyone else by my actions, I should be free to do as I please.  Yes, we have to be very responsible, but not a slave.  In addition, what if the above global warming scenario is not what is really going on?   Like, is it true that too much CO2 is really warming the atmosphere?  I got news for you,it’s false as far as I can tell.  How do I know?  Four words: Ice Core Temperature Records.

Over the years, scientists have drilled ice cores in Greenland and in Antarctica.  They have used these cores to calculate global temperature changes based on analyzing the layers of ice deposited for each successive year.  It goes back hundreds of thousands of years with about a decade of resolution for the oldest ices.  There’s always been change and constant up and down swings in temperature according to the ice cores, but one major cycle stands out clearly and that is the Ice Age Cycles.  Approximately every 100,000 years, the Earth warms after being gripped in freezing Ice Age conditions where thick ice sheets cover a good portion of the land mass of the Earth. The resulting short and warm “interglacial” periods last about 12,000 years, more or less.

Presently, we are between ice ages and are living in such an interglacial period.  It warmed up over 11,500 years ago.   Now, if things go like they have done at least 4 times before in the past 450,000 years, the interglacial will soon come to an end and we will cycle back into another Ice Age.  That is the history of our world.  Ice Ages for long periods of time and then short, warm interglacial periods that are conducive to large populations of plants and animals, including humans, are the norm.   Life near the warmer equatorial zones is possible during an Ice Age, but the population of humans and the animals and plants we depend on for food will be considerably reduced from today’s levels.  This is fact.  Ultimately, this is the true future we face.

But, could we mess up in the near term to screw up our present climate enough to wipe us out?  If we keep polluting the environment with chemicals and whatnot we might kill ourselves that way, but that is not really climate related.  If you mean putting out too much C02 and melting the polar ice caps or some other such scenario, I kind of doubt it.  According to some, we’ve been rising in temperature since a “Little Ice Age” in the years between 1300 to 1900 AD that coincided with a strong minimum in solar activity (low sunspot counts.)  We are only now getting back to levels that would be considered “normal” compared to temperatures of the last 10,000 years. 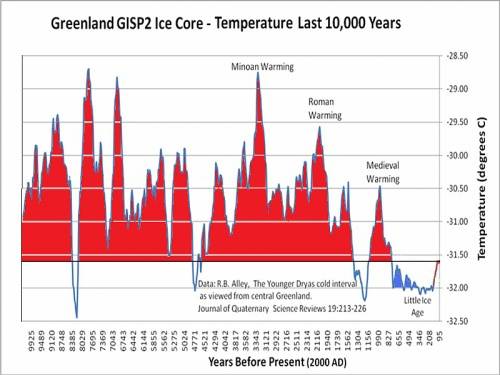 Since about the late 1800’s, the sun’s activity has increased and so has the temperature.  Today, the sun’s activity is on the decrease and the slight warming we’ve experienced the last 100 years has slowed and we even seem to be cooling down again.  So, the rise in temps the Global Warming crowd says is our fault is more aligned with solar activity, by all indications.  Additionally, during the Medieval Warming Period around 1000 A.D., it was warmer than it is now and we were not producing CO2 like we are now.  That doesn’t jive with what they’re telling us about CO2, now does it? 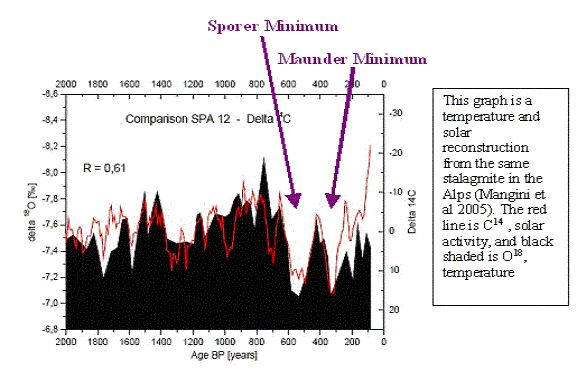 There are also records that indicate that CO2 levels lag behind temperature levels by 700 to 800 years or so.  That means the release of CO2 is after the temps increase, like when the oceans slowly release dissolved CO2 as they warm up.  That would explain the lag.  Could it be that CO2 has hardly anything to do with the climate change at all?  That’s a strong possibility, based on the above.  You can check all this out for yourself.  It’s in the records, especially the ice cores. 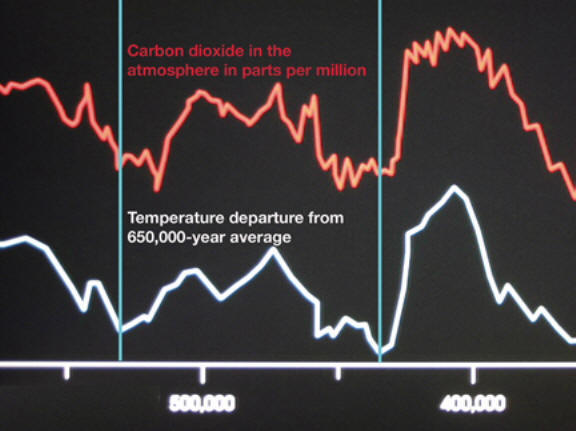 Now, if the carbon credit monetary system is based on bogus science, why should we even consider such a system?  We shouldn’t!   That’s the bottom line!  Lies and a deliberate plot to deceive us are evil, plain and simple.  Any person with common decency knows this.  Religious and non-religious people of moral integrity would probably all agree that such a system is bound to collapse when the truth becomes known and the lies can no longer be tolerated by the masses.  This is simple logic of how civilizations work.

So, who are these people that are doing this and why would they deliberately lie?   It is a greedy and power hungry, so-called ruling class that has been trying to dominate us for years, by all indications.  Led by the Rothschild/Rockefeller banking cartel and their associates, they are attempting to take total control of the world by controlling its monetary system, according to their own documents.   They hold that the end justifies the means, even if it means doing things that no sane or moral person would ever do. Their carbon-based form of credit would allow total control of the world population.  No one could buy or sell without their “money.”   Remember when I said carbon has 6 protons, 6 neutrons and 6 electrons?   How diabolical of them!   Their biblical number-of-the-beast system is finally rearing its ugly head, some religious people would probably think – and they would be right!

It gets even weirder the deeper you study these people who are trying to take over.  You find out that their internal control structure is secret society based, like the Freemasons and Illuminati, along with countless other secret societies of a similar nature.   Some Freemasons in particular are thought to follow pagan practices and their most leaned Masonic scholars talk about “Lucifer” as someone to be venerated.  Also, they are obsessed with population control.   On one of their Masonic monuments called the “Georgia Guide Stones,” they call for only 500 million for a future Earth’s total population, which means over 6 billion people have to go!   OMG!   Can you believe these monsters?

Is controlling the money supply and forming a one world government the prelude to them phasing out billions of people or will they get rid of the people first then form their New World Order?  It will probably be the latter, but nothing is for certain just yet.   The governments of the world still have enough nukes to destroy the world many times over, so these control freaks are probably trying to incite some kind of clash between the various governments.  If you look around now you see that the Rothschild/Rockefeller cartels and their controlled minions are pushing for war with IRAN, N. Korea and by proxy, Russia and China.   If these evil cartels get a war started, it could quickly escalate into a nuclear conflict with many people killed, which is just what they want to reduce the world’s population.  Then, they would come out of their hiding places and announce their one world government plan that they wanted all along, and take over what remained of civilization.

So, now we must all make a decision.  Should we let the PTB keep promoting these lies about Global Warming and how we must all be controlled or killed off to preserve our species or should we take back control of our own lives, derail the Rothschild cartels and plan for surviving a future Ice Age?  By using our brains and finding new sources of energy that would not pollute the planet we could give ourselves the tools we need to survive the coming freeze.

There is talk among some researchers that massive amounts of energy can be obtained by exploiting some obscure principles of physics called “Zero-Point Energy.”  In fact, it is claimed by these same researchers that the PTB have been deliberately keeping these technologies secret and hidden from us for the last 100 years or so.  They would lose their monopoly of fossil fuels as the dominant energy paradigm if this “free” energy technology ever gets out and off the ground.   That would be fine by me.  Lots of other people feel the same way.  Free energy tech would put all the so-called elite and their evil cartels out of business!   That’s the only way to fight these evil bastards, in my opinion.

In a world of abundant and almost limitless energy, the human race could reach our ultimate potential.  One day we would move out into the universe and live among other peaceful civilizations that have already made this transition.  All that is needed is for the human race to realize that we have more choices than the ones we are being given by those that presently control us.

Copyright 2011 by Mike Broussard.
Original text may be copied and used under the “Fair Use” doctrine. All other rights reserved.