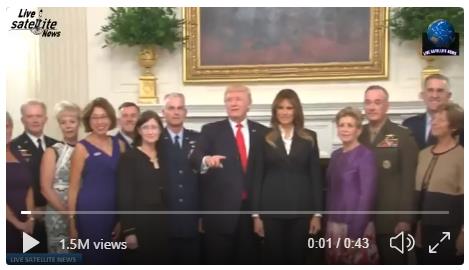 “You guys know what this represents?  It’s the calm before the storm.”  – President Trump, at a meeting in the White House with military generals and their spouses.

This page is based on information being disseminated by an anonymous source known as, “Q.”   After considerable study of the material being released by said source since 2017, I believe Q is actually a team of military intelligence operatives who are working with President Trump and various military branches and departments of the US government.

Trump himself has re-posted some of this Q info on his Twitter account, with his latest tweet of that material being the most popular saying that Q and his group have released:  “Nothing can stop what is coming!”

Well ladies and gentlemen, it is finally here – the storm that President Trump alluded to back on October 5th of 2017.

If you have awoken to what is really going on in the world, you might have figured out by now that Trump was never supposed to win the last presidential election, at least according to the elite of the so-called, “establishment.”   In fact, the election was so fixed for Hillary Clinton that they thought she would never lose.  They were at a loss to explain why she did not win and were totally unprepared for the consequences.

After Trump won, they hastily made a decision to try and oust him by any means necessary, including assassination.   Their only problem was the fact that in attempting to fix the election and oust Trump after he won fair and square, they have committed numerous crimes that they now have to answer for.   They’ve been committing other crimes, too and have been doing it for years.

These crimes they have committed are obvious when you investigate all that was done before and after the election, like our Inspector General Horowitz did.  His report of Dec 9, 2019 outlined some of the wrongdoing.   There was so much wrongdoing, in fact, that it would land regular people like you and I in prison for life, or worse.   Why are the perpetrators of an apparent soft-coup against a sitting president still not in jail and why are they not being prosecuted for the other crimes committed?

The reason why is because our society has been compromised and controlled for a very long time by an establishment composed of very bad and sick people.  An evil cult, if you will.  This group or cult has infiltrated all levels of our banking, business, law, government, medical, scientific, ecclesiastical, educational, news and entertainment industries and organizations throughout the world.

They’ve used their positions of power for nefarious purposes, one of which is to try and implement a Global (New) World Order that is totalitarian and that will ultimately be modeled after the Chinese communist system.   They are also obsessed with reducing Earth’s human population.   They are presently trying to shorten the lifespan or kill as many “undesirables” as possible, with some success, I might add, so that they can have the world to themselves.  That includes you and I and most of our friends, by the way.

So, how and when are we going to arrest and convict these bad actors?   If you think about it, Trump has probably known for a long time what is going on.   Probably since before he was elected.  Trump knew he could not take on this evil establishment without a plan.   He knew he could not take them on without help from the military and federal agencies that are not compromised.

So, for the past several years since assuming office, Trump has been cleaning up the DOJ, the FBI, NSA, CIA and other compromised agencies.   Most of the bad guys are now gone from the top levels of these places.  There are still some at lower federal levels and quite a number of them in state and local governments and law enforcement.  How do you deal with so many of them without their combined power thwarting your efforts?

You take their power away, that’s how.   You cause an event to occur where they temporarily have no more power.  What kind of event could accomplish that, you ask?   How about martial law with the military and the National Guard taking over for a short time?   How about a global “pandemic” that scares everyone into compliance?  (BOOM!)

On Wednesday March 10th, the first National Guard troops were activated because of the Corona Virus threat. On Friday the 13th of March 2020, Trump announced that he shut down all air travel from Europe because of the COVID19 pandemic.  On Good Friday, April 10th, 2020 (4-10-20,) or exactly 30 days later from the first NG activation, this travel ban will be 2 days from expiring.   In between the dark day of Friday the 13th and the light day of a promise of salvation of Good Friday (dark to light,) we will probably have a lockdown of 10 or more days where all travel and public events are suspended and we will have to shelter in place where we are.  In other words, Martial Law will be in effect.

This is when you have military teams take out bad guys from a list compiled over the last few years.   This list is presently in the form of over 150,000 sealed indictments in the federal judicial system.   A map of how many indictments in each state can be compared to the COVID19 areas of infection of each state and they match fairly well.  Check it out: 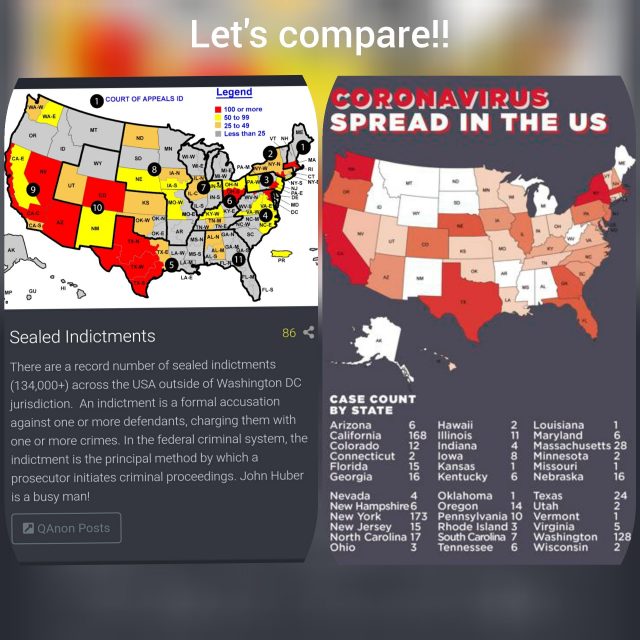 Don’t panic.  Be calm.  Our country will soon be returned to We the People.